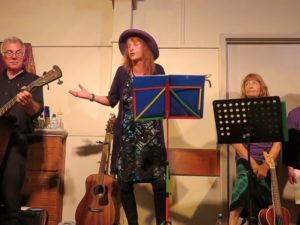 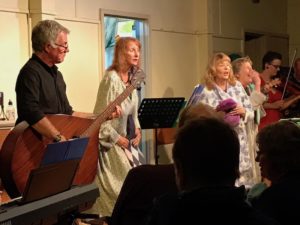 Having gathered some confidence from my first CD launch as a free house concert in Northcote, I was nevertheless still apprehensive about my second launch as a paid performer at the more professional monthly VFMC concert in Ringwood. All my support musicians turned up on time, thankfully, but when they asked me where I wanted to position them, I had absolutely no idea! So they all sorted themselves out and the show began after supper, with me acutely aware of only having one hour to deliver the best of my ‘Baloney’ album to the audience… And what a lovely crowd it was too – joining in from the start by woofing on command in ‘A Dog’s Life’ and later partaking in a 3 part round for ‘How I Love My Hottie’. 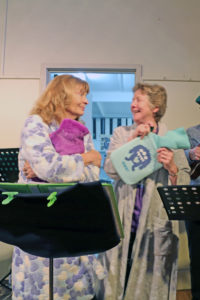 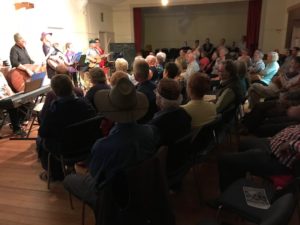 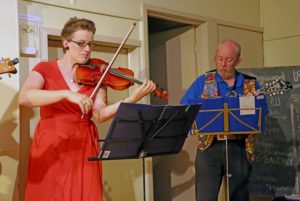 We managed to get through 13 out of the planned 14 songs and tunes for the evening, sadly having to leave out ‘Garage Girl’, featuring not only Bryce on piano but Bruce on snare drum. Hopefully we can soon do this as a spot act at a future concert night. It was difficult to decide which others to omit for that concert, but I basically tried to accommodate the musicians playing the more unusual instruments. So we performed ‘Koori Spirit’ and ‘Wattle Day’ which both had didgeridoo, though I was disappointed that at the last minute my Koori friend Sue, whose story is told in ‘Koori Spirit’, was unable to attend due to injury. Similarly, we performed ‘Dunlewey Dream’ and ‘Edith Oenone’ with Uillean pipes, although the last had to be performed anyway as it includes the word ‘Baloney’ to rhyme with Oenone. The crowd seemed to love the range of different instruments, including glockenspiel in ‘Aussie Christmas Day. And except for the electric bass, we were basically acoustic, as preferred at the folk club. I was also microphone free, unlike the first launch where I had a clip-on mike for the outside conditions.

One song that went down particularly well at both my launches, and that I am still getting positive feedback on, is one that really should have been on my first album (‘Roller-Coaster’): ‘The Breastfeeding Blues’. Having breastfed for about 12 years continuously, I got off to a horrific start when I was unable to successfully establish breastfeeding in the Royal Women’s Hospital after the birth of my first child. My breasts grew bigger and bigger, my friends laughed longer & louder, my baby got madder & madder, until finally on the tenth day the lactation consultant was called in. She took one look at my massive, engorged breasts and poor, starving baby who she then grabbed and thrust onto one black and blistered nipple. It worked, and I suddenly realised how it should feel. Great relief along with the agony! And that was only the start of my breastfeeding journey… 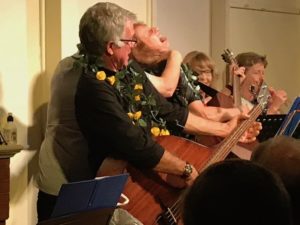 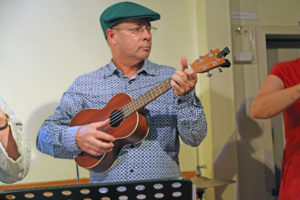 Another well-received nostalgic song, harking back in fact to before 1998 when my partner died, was ‘A Little of Your Time’ – the nearest thing I’ve ever written to a love song and, in fact, eerily prophetic with the last lines of the final verse stating: “And if together we’ll remain, now only time can know.” I explained to the audience that, as our youngest child, Gronya, was only 3 when her father died and she doesn’t remember him, the only thing she asked from me for her 21st birthday in 2016 was for me to record this song. And luckily, Hugh was still well enough to record and play glorious violin, guitar and bass for this track (no.2) too. Naturally, I never considered omitting ‘Hugh McDonald’s Lament’ at this second CD launch – and this time, unlike at my first launch, I made no mistakes on the tin whistle!

Most of the other songs we performed went down well and it was gratifying to find myself swamped afterwards in a mini-rush of people wishing to buy copies of ‘Baloney’ – a few club folkies but mostly people that I didn’t really know. One man I’d never seen before kept telling me what a great concert it had been, which was an unexpected thrill! I felt a massive sense of relief overall that I’d pulled it off, especially during a difficult week on the home and work fronts. I also felt once again incredibly grateful to the wonderful musicians who had enriched not only the CD but also the live performances. Without them it would have been lacklustre and missing something.