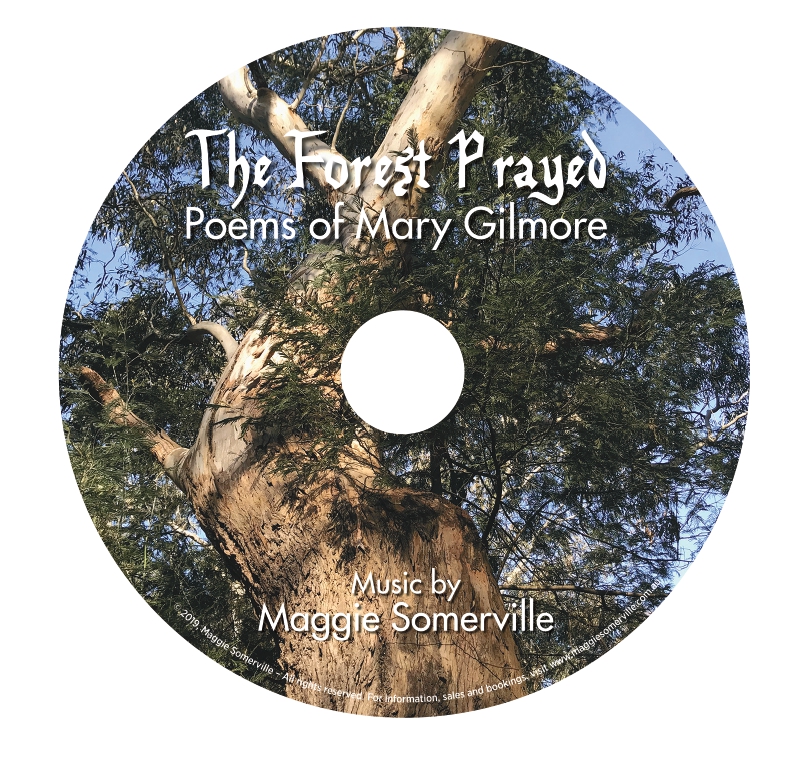 My first album of songs based on poetry – specifically 16 poems by Dame Mary Gilmore (whose face is on our $10 note) which I have set to music. The selection is mostly of her lesser-known verse but also includes Gilmore’s most famous poem, ‘No Foe Shall Gather Our Harvest’, which is also accessible on YouTube. Rich instrumentation colours each song, with cello, violin, Uillean pipes, piano, didgeridoo, and more.

I am delighted, and relieved, to announce that I have finally completed my new album, ‘The Forest Prayed’, of poems by Dame Mary Gilmore which I have set to music over the last few years and now recorded.
It has been a marathon effort recording this album, with many trips up the mountain to the beautiful studio in Kalorama, much liaising with various instrumentalists, and stressful emails about copyright issues with the owner of Mary Gilmore’s estate as well as with the Dobell Foundation (about the use of Dobell’s famous portrait of the poet).
My son’s tragic death just as I completed the album has now led to my dedication of the album to him, especially as his graphic artwork appears on both the CD cover and the booklet. I like to think that he would be very happy to see this album finished and about to be launched, as I so often played him different tracks and sought his feedback, which was always positive and supportive. 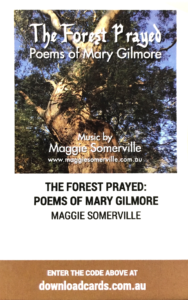 In our ever-changing world of technology, I was worried I would have to deal with tiny USB sticks for my new album, but I’ve now discovered that, with CD players now becoming rapidly extinct in cars and elsewhere, we have a new phenomenon – the download card. At least this has the advantage over a USB stick of having a visible title, image and website on it. So I have now organised the album as a CD with a download card inside, protected by shrink wrap – a full package for $20 each.

My first launch was on Saturday 6th April, 4-6 pm in the Memorial Hall, Dennison Street, Crookwell, New South Wales – near where Mary Gilmore was born. It was hosted by the Upper Lachlan Shire Mary Gilmore Society and launched by Ms Louise Taylor, wife of local member, Angus Taylor. I have also organised a major launch in Melbourne, at Federation Room, Maroondah Federation Estate in Ringwood, on Saturday 27th July, from 2pm to 5pm. There may be other launches, to be announced.

Despite being on our past and current $10 note and being made a Dame for her services to Australian literature, Mary Gilmore has, I believe, been long overlooked. The works of both her contemporaries, Banjo Paterson and Henry Lawson, are extremely famous and strongly promoted musically although neither was made a knight. Is this because they were men and Mary Gilmore a woman? I believe so, and feel that it is now time for the balance to be redressed and for Gilmore’s literary talents to be more widely publicised and promoted just as Paterson’s and Lawson’s have been down the years by various musicians. I am proud to be the first person to put together a full album of this talented woman’s works and to hopefully help to immortalize her poetry in Australia and beyond. 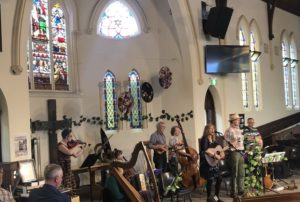 Read all about the launch – Saturday 5th October at Brunswick Uniting Church, Brunswick.

CD Review of ‘The Forest Prayed’ by Dale Dengate of The Bush Music Club in Sydney.

Read all about the launch – Saturday 27th July at Maroondah Federation Estate in Ringwood. 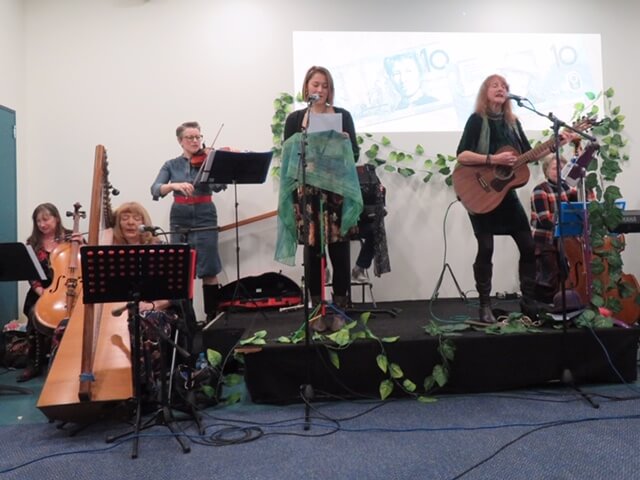 My Ringwood Launch of ‘the Forest Prayed’ – Read the blog post

CD REVIEW OF ‘THE FOREST PRAYED’ BY DALE DENGATE OF THE BUSH MUSIC CLUB IN SYDNEY.
The Forest Prayed is a truly delightful CD of Maggie Somerville’s settings for the poems of Mary Gilmore. The music is totally appropriate and such pleasant listening one wonders why it hasn’t been done before, in the way Henry Lawson’s poems ‘walked off the pages into songs’. Maggie Somerville has written tunes, which are so evocative of the bush melodies that you can almost smell the gum leaves burning beneath the billy tea. The backings are varied but over all seem to include every instrument found in a bush band and more. These musicians play sensitive accompaniments to Gilmore’s words that are sung with great clarity enabling every word to be heard. Dame Mary Gilmore led a distinguished and romantic life as a humanist, political activist and social reformer and supporter of other artists. She was an acclaimed writer in her own day and I well recall the portrait of her in the Fellowship of Australian Writers rooms where the Bush Music Club met. On her death, the Bush Music Club put out a special Singabout magazine with a pen sketch of Mary and an obituary by John Meredith. The most famous portrait of Gilmore was Dobell’s painting commissioned for her 90th birthday; it aroused controversy as it depicted an old woman with slim face and wispy white hair that Dobell painted so delicately but dressed in formal old fashioned lace and satin brocade quite different from the younger portrait once on the ten dollar note. Dobell’s portrait has been included on the attractively presented CD cover and booklet. This booklet is very comprehensive with dates of publication of the poems. The historical context of the poems is significant to the varying sentiments expressed. There are 16 tracks that cover Gilmore’s poems set to Somerville’s music. The topics include many Australian themes including the environment and a love of nature as well as a concern for the plight of the indigenous peoples, women’s experience and World war 11 fears with the threatened invasion of the Japanese forces, and tributes to contemporary poets, Henry Lawson and Shaw Neilson. Maggie Somerville has taken on a well over due task and created beautiful and thoughtful songs that I hope many will learn to sing or they will continue to enjoy listening to the poems of Mary Gilmore. - DALE DENGATE