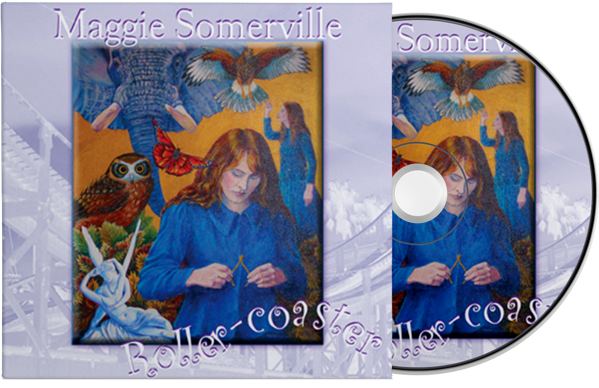 My first album comprising 16 original songs and tunes written over a period of many years while raising three children alone. As the title indicates, the songs reflect the ups and downs of life and move from joyful songs about certain places to the bitter-sweet agony of childbirth to more serious themes like the death of a child or of a beloved pet. The set of jigs has actually won an award and also been played at some Victorian Folk Music Club dances over the years. Instrumentation includes traditional folk instruments like violin, tin whistle and bodhran.

The urge to produce a CD actually began in the mid-1990s when I realised that I had quite a lot of original songs and tunes that were going nowhere. A couple of my very early songs had been performed in the early ‘80s with Bruce & Jill Watson in our band ‘The Squatters’, but that band had long since broken up. I actually recorded one more recent song in the late ‘90s, ‘Hepburn Spa’, with five or six other women, with an album in mind. However, the sudden death of my partner in 1998 led to an incredible loss of momentum, with sole parenting, legal battles and grief counselling taking over for years. Some sporadic recording took place with Kevin Parsell, but it wasn’t until Bruce Watson recommended Steve Bullock (now President of the Victorian Folk Music Club) in the mid 2000s that I began to record in earnest.

The opening track was obvious. Having in 2000 bought a rundown but gorgeous little old miner’s cottage in South Gippsland from a friend, the kids and I all fell in love with nearby Waratah Bay. I had expected to have to drive to the Prom continually in summer, but we discovered closer beaches such as Sandy Point, Walkerville and, particularly, Waratah Bay – which of course led to my first song on the album. Amusingly in hindsight, being totally out of touch with the folk scene then, I somehow managed to play piano accordion well enough for recording purposes though I could/can barely play the instrument. It was fun searching for bird calls from South Gippsland as well as beach sound effects to start and finish the song, and I was rapt to later win first prize in a song-writing competition for ‘Waratah Bay’.

Parenthood naturally motivated many songs. Believing that every child I had was my last, ‘Journey’ is the story of my second pregnancy, with its inevitable hopes and fears that every woman seems to feel at certain stages, and ‘A Better Way’ describes the reality shock of childbirth, with audience participation in the breathing exercises instead of the traditional chorus – great fun to perform! My last track, ‘Julian’s Lullaby’, was initially written as just a waltz, but I found myself putting words to it for my firstborn child. Then the heartbreaking loss of a child in the early ‘90s for an old friend of mine led to ‘Softly the Waters’ which I sang on the first anniversary of the three-year-old’s tragic death. On a more positive note, ‘Gronya’s Waltz’ is a simple little tune featuring piano and violin (neither played by me!) to celebrate the arrival of my last child, born in 1995.

The only a cappella song on the album is the chirpy ‘Hepburn Spa’, mentioned above, which wrote itself in the car after my first visit to the spa with my two pre-schoolers – “Bubble bubble bubble bubble….” – a wonderful day indeed! The track following this, ‘Back to Ireland’, was inspired by travel much further away: to trace my roots back to Ireland in the ‘70s and ‘80s, with an amazing sense of déjà vu as I found myself drawn back again and again to this magical country that I immediately felt at home in. I was determined to include every possible Irish instrument in the song, with guitar and bass behind fiddle, tin whistle, Uillean (Irish) pipes, mandolin and, at the last minute, Steve Bullock on bodhran (Irish drum).

Some of my other songs on ‘Roller-Coaster’ seem to be a mixture of highs and lows, such as ‘Tsunami’ which describes the 2004 Boxing Day disaster that killed so many yet inspired so much heartfelt support. (I had actually recorded this song earlier as a single to raise funds to send to tsunami relief.) ‘An Ordinary Cat’, complete with sound effects, explores my love of cats from their destructive kitten phase to their later sad demise – a song my vet friend Jane could never hear without tears! Similarly, ‘The Waiting Game’ looks at the despair and hope experienced by carers of drug addicts, while ‘You Taught Me How to Whistle’, written in the last two weeks of my father’s life, is a nostalgic trip down memory lane.

The remaining items on the album are four sets of tunes written over the years. By far the oldest one, ‘Benjamin’s Polka’, was written in the early ‘80s as a sort of musical experiment. I had just bought two bodhrans in Ireland, one for me and one for my fellow band member, Benjamin, and I had this idea of creating a question and answer tune featuring tin whistle and bodhran, with both instruments swapping roles during the tune. I then added a second tune, ‘Weekend Away’, with the pair working well and performed by ‘The Squatters’ many times before eventually being recorded later, with violin, guitar and bass added. My tune ‘Dreamy Peter’ came about soon after my partner’s sudden death in 1998 when, amid the trauma and grief, I kept hearing this tune in my head until finally, about two years later, I penned and recorded it and was persuaded by Kevin to feature my inherited gift of whistling in it. Discovering you have a grandchild you didn’t really know about is fairly mind-blowing, and ‘Meeting Isabella’ hopefully expresses my great joy at first meeting young Bella. The remaining medley of tunes (‘Yabby Catcher/Purple Jenny/Foster Jig’) resulted from my first attempt to write some jigs, which to my delighted surprise have been used for the Gumtree Quadrille at a couple of Woolshed Balls – what a buzz to see a whole hall of people dancing to my tunes! A feeling of overwhelming relief swept over me on completion of this first album, although I knew a second solo CD must follow one day to accommodate a couple of songs that didn’t quite make it onto ‘Roller-Coaster’. Time would tell………