New music video – ‘No Foe Shall Gather our Harvest’

After finally launching my second solo album of original material, ‘Baloney’, I have now commenced a new musical project – an album of Mary Gilmore poems that I have set to music over the last two or three years. The first stage is just completed: a YouTube music video of Gilmore’s famous poem, ‘No Foe Shall Gather Our Harvest’, written in 1940 when the invasion of Australia by Japan appeared imminent. This can now be found on YouTube with Mary Gilmore’s and my name, or via this link: https://www.youtube.com/watch?v=d-G2sHYanaU

I have gradually learned more and more about this amazing woman as I’ve delved deeper into her creative works (prose and poetry), her autobiographical writing, as well as various biographical pieces about her. Not only was she incredibly prolific during her 97 years but she was also very active politically and socially. She fought continually for the underdog, including women and aboriginals, and was women’s editor of ‘The Worker’ newspaper (of Australia’s biggest trade union, AWU) for many years. She also met the radical William Lane and made the trip to Patagonia with him and others to help form a utopian community there – which eventually failed. It was there she met her future husband, who she married and had one son with.

Furthermore, Mary Gilmore was made a Dame of the British Empire for her services to literature – the female equivalent of a Knight, unlike her contemporary male poets, such as Henry Lawson or Banjo Paterson. However, like Henry Lawson in 1922, Mary Gilmore was accorded a state funeral when she died in 1962. Her image has also featured on the reverse of our ten dollar note since 1993, along with the start of her most famous poem, ‘No Foe Shall Gather Our Harvest’ more recently. I have been lucky enough to obtain both volumes of her collected verse, which are enormously thick and arranged into complex alphabetical sections with extensive footnotes by Gilmore.

On my friend Stephen Whiteside’s advice, I decided to begin this new musical project with something fairly ambitious – a YouTube video of Mary Gilmore’s most famous poem, ‘No Foe Shall Gather Our Harvest’, complete with appropriate visual images to suit the words of each of the four verses. This was inspired particularly by watching some of Eric Bogle’s video YouTube clips, such as ‘The Green Fields of France’ and ‘As If He Knows’, where the moving photographs and paintings of World War 1 soldiers and horses etc contribute to the beauty of the musical experience. I have chosen ‘No Foe Shall Gather Our Harvest’ not only because it is probably Gilmore’s most famous poem, but because it was used as a morale booster during World War II and is extremely patriotic. I put the poem to music in 2014 and have subsequently performed it here and there, including at the 2017 Benalla Poetry Muster where it won first prize for the Australian section of the annual Song Competition. 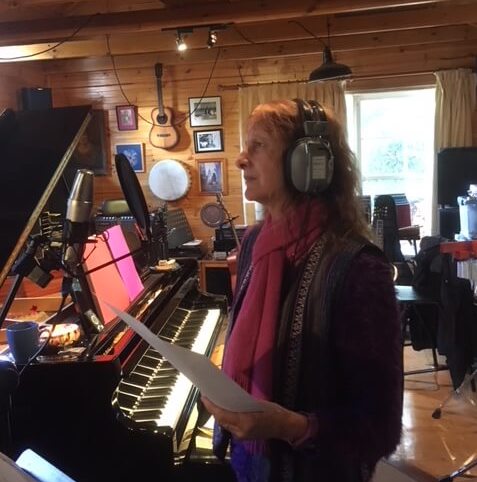 So I have this year spent hours recording the actual song, employing some great local musicians: Sam Lemann (guitar and mandolin), Catherine Leslie (violin and viola), Christine Middleton (harp), with Dave Billings kindly doing the recording as well as adding bass and keyboard. I struggled a little with vocals as the demands of my teaching week usually leave me with a tired, depleted voice by Friday, my day off, when I have been doing my recording. However, my voice and spirits lifted as it has been such a wonderful experience to work up at Dave’s studio in Kalorama, with tame king parrots and rosellas flitting around his large and glorious garden. Plus the inevitable cups of tea – a special teapot brew – certainly enhanced the experience, especially when accompanied by my Brunswick East baklavas… YUM! 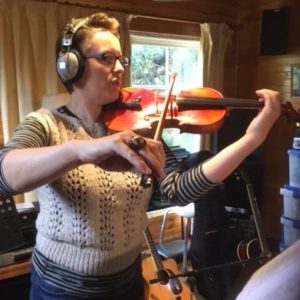 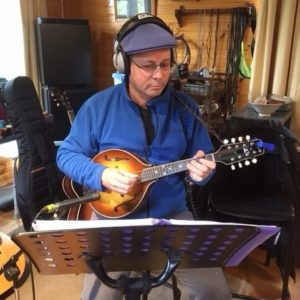 However, we found that it was not a simple matter of just matching suitable visuals to the words of the song, as the demands of copyright laws meant rigorous efforts must be made to, firstly, discover the creators/owners of the visuals, and then to receive permission to use them online. Hence, Stephen found himself sending and receiving emails from various quarters, such as the Australian War Museum, and I found myself paying out $99 where necessary to facilitate the use of certain images. For one image alone I was actually asked to pay $6,000! Needless to say, we abandoned that image (which turned out to be of American women anyway) in favour of a slightly daggier image of two Aussie women walking down Collins Street, Melbourne, in about 1938. All a learning experience! And hopefully worth all the effort… The video was finally uploaded early September and has had over 390 hits in its first week – so far, so good!