My Ringwood Launch of ‘the Forest Prayed’ 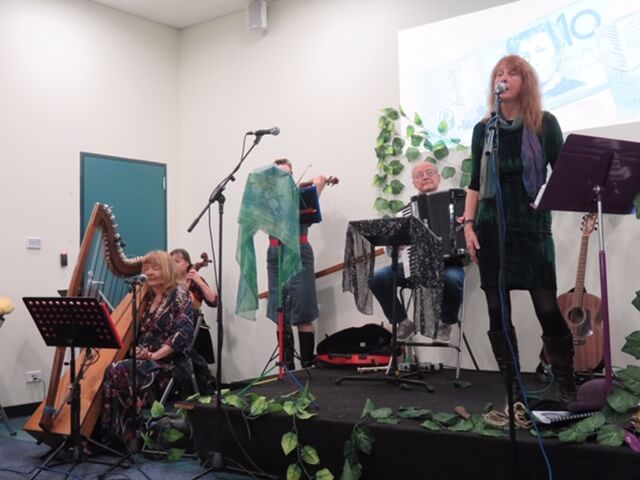 Having had my very first launch of ‘The Forest Prayed’ up at Crookwell (near where Mary Gilmore was born) earlier this year, I had felt a little frustrated at being asked to only sing one song at that launch – although I ended up by audience demand actually singing a second song. For despite the fact that I sold nearly 30 CDs at the launch, I still felt that it wasn’t really a full launch without most or all of the tracks on my album being performed.

So it was with much preparation and anticipation that I facilitated what felt like a real launch on Saturday 27th July at Maroondah Federation Estate in Ringwood. And with the help of an army of superb musicians, I was able to perform all 16 tracks off the album before afternoon tea. A couple of the songs required some props and clothes changes, so our MC Stephen Whiteside then took over introducing those particular songs as I made the necessary adjustments, thus saving time being lost between songs.

The venue was great – a fair sized room with a small stage at one end, but plenty of room on either side for extra musicians, and a sink and fridge etc. down the other end. The audience was a good size, with every seat filled and a few extra chairs needed for some latecomers too.

All the musicians did me proud. Many of them were ones who are on the CD and others helping out with the same instruments for the launch. Such a range of instruments at one venue was incredible: guitar, double bass, violin, viola, cello, ukulele, piano, harp, mandolin, banjo-mandolin, didgeridoo, harmonica, accordion, concertina, jaw harp, Chinese yangqin, tin whistle, washboard, snare drum and even musical saw. 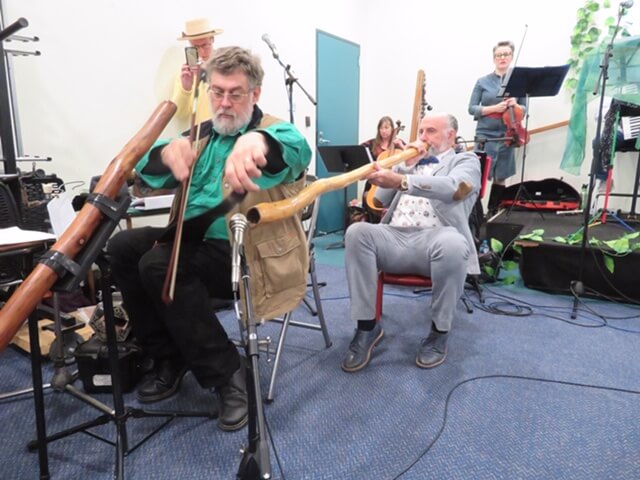 A special thanks to Ray Simpson, who played didgeridoo, saw and concertina, for he made the effort to attend while in the throes of bronchitis! All the songs were well received, with a few surprises. In particular, I made a snap decision at the end of ‘I Wisht I Was Unwed Again’ to suddenly leap off the stage into Stephen’s arms in line with the song’s sentiments – to the consternation of both Stephen and the audience! 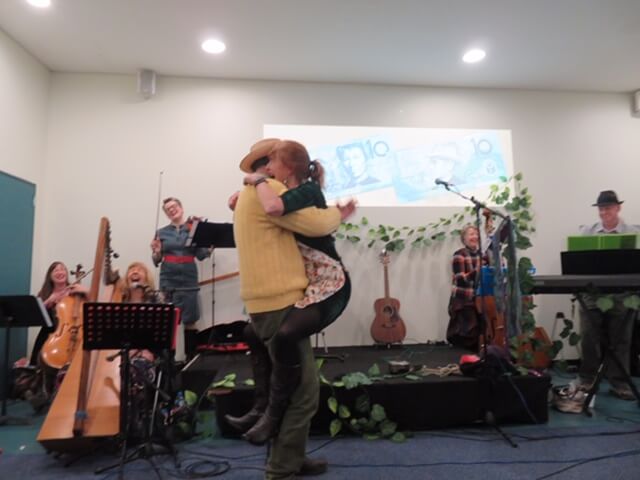 There was also some spoken word in three of the songs – a little at the start of the last song, ‘War’, but much more in two others. In ‘Never Admit the Pain’, after the first three times through were performed in song and then instrumentally, Stephen recited the short poem beautifully before the audience joined in (words handed out) for the final rendition of this moving piece. In Gilmore’s most famous poem, ‘No Foe Shall Gather Our Harvest’, during the instrumental after verse 3, Stephen gave a rousing rendition of John Curtin’s moving address to the nation of 1941, after which the audience burst into spontaneous applause even though the song hadn’t finished yet – I held off starting the last verse till the clapping had subsided. 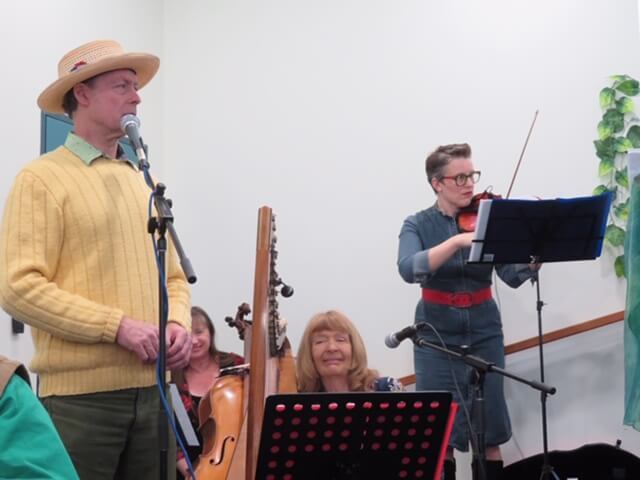 Apart from the number of songs performed, another major difference between my first launch up at Crookwell and this one was that this recent one was actually a joint launch. For the afternoon was not all about me as following afternoon tea, Benjamin Lindner launched his first book: ‘Waltzing Matilda: Australia’s Accidental Anthem – A Forensic History’. This was why the whole event was entitled ‘The Two Sides of the $10 Note’, for while I am promoting Mary Gilmore on one side, Benjamin has delved into the history of our famous song by Banjo Paterson on the other side. In fact, the whole afternoon kicked off with a witty poem that Stephen Whiteside wrote, entitled ‘Two Sides of the Note, which Benjamin and I recited – me being Mary Gilmore and Benjamin being Banjo Paterson, each of us having a bit of a go at the other’s importance on the $10 note. At the end of Benjamin’s interesting presentation about his new book, including some challenging questions from audience members, the audience all sang along to the original version of ‘Waltzing Matilda’, with me struggling on the autoharp to play the chords as did Christina Macpherson back in 1895 in Queensland. 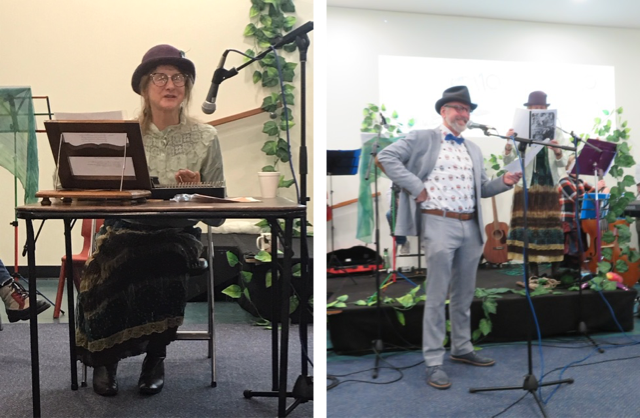 We had fun setting up and decorating the room too. I draped lots of plastic green leaves across the wall behind the musicians, and we set up a table near the entrance with not only our products (CDs and books for sale) but some Mary Gilmore memorabilia and a fake skull to represent the dead shearer connected with ‘Waltzing Matilda’. I also displayed my recently framed letter from the Prime Minister, for on discovering that Mary Gilmore is actually Scott Morrison’s great-great aunt, I sent him a copy of my album. He eventually replied, thanking me for it and congratulating me on my CD launch up at Crookwell (which one of his minister’s wives had launched earlier this year). 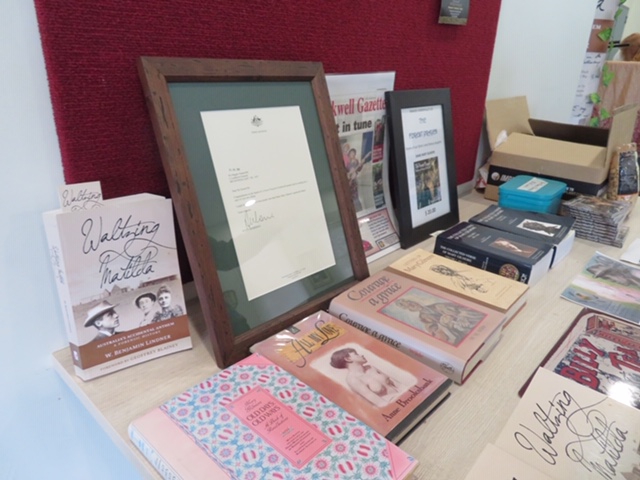