Launch of ‘The Forest Prayed’ in Brunswick Saturday 5th October, 2019 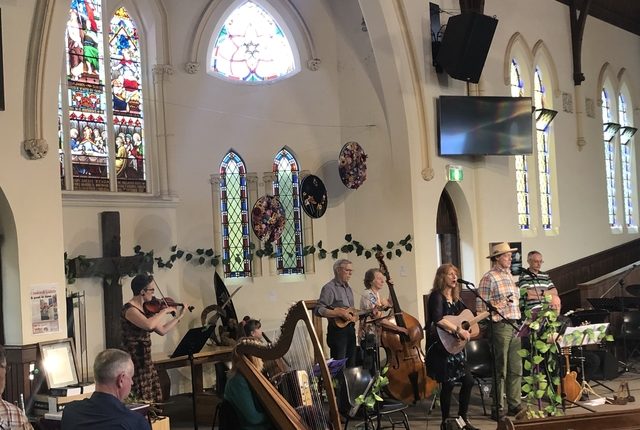 Having successfully had two launches of my new album – in both Crookwell (near Mary Gilmore’s birthplace) and Ringwood, Melbourne, earlier this year, I was eager to also hold a launch in my local area – Brunswick. Choosing my local church, Brunswick Uniting Church, for the venue turned out to be the most fortunate piece of luck as, by total coincidence, the date I selected fell in the week that the church was holding a major art show entitled ‘Let the Earth Speak’.  Obviously my new album’s title tied in with that beautifully! I also felt a little emotional as this was the same church where my son’s funeral was held back in January this year. So this particular launch was destined to be quite a bitter-sweet event for me!

The day arrived – perfect Spring weather: not too hot, not too cold. The food my daughter Gronya and I had prepared for afternoon tea was transported over to the church and, with the kind assistance of a couple of church people, stored and organised for the food break. This was now to be a little later than planned (which was originally to be halfway through, after 8 songs) so that our violinist could leave at the break to return to the Mornington Peninsula in preparation for her massive fundraising (Smith Family) bike ride next day around the bay. So we then performed the 13 songs that involved violin, viola or recorder, which Catherine played, before afternoon tea.

There was a decent-sized audience, including a couple of my son’s skateboarding friends as well as churchgoers, grief support group members, old friends, relatives, and of course folk club members, several of whom participated in the instrumental and vocal backing for the launch. My friend Stephen Whiteside shared the MC role with me, as well as helping out in a few songs, particularly in the instrumental break of ‘No Foe Shall Gather Our Harvest’ with his brilliant impersonation of the 1941 Prime Minister, John Curtin – his rousing address to the nation when Japanese invasion appeared imminent. Stephen received practically a standing ovation for this and I had to wait for the applause to die down before singing the last verse. Other high points of this first part of the concert were ‘The Whistling Man’, which had terrific audience whistling participation, and the last song: ‘I Wisht I Were Unwed Again’ with me donning an apron and banging a saucepan to emphasize the drudgery of domesticity.

The afternoon tea break was great, with lots of people catching up with me and with each other and even discovering old friends or acquaintances they hadn’t seen for ages. And how lovely to have all those beautiful artworks throughout the church and hall to study and enjoy!

The last three songs were performed straight after the break. We began with the title track: ‘The Forest Prayed’, with Bryce on piano, Jenny on cello, Maree on accordion, and Ray starring on musical saw.

This was followed by ‘Old Botany Bay’ with me once again dressing up, this time to represent convict misery with rope, chain and axe. (One of my son’s mates said later: “The axe was the best!”)  However, the high point of the event was, for me anyway, the very last poem/song: ‘War’, with an utterly brilliant performance on bagpipes by young Daniel, in full Scottish kilt. (At the Ringwood launch we had Helmut simulating the bagpipes on his electronic accordion.) As Daniel strode down the aisle playing the second half of the song, I felt my hair stand on end and could hardly finish the song. That memory will remain with me forever and, by the endless applause, with all who were there too! 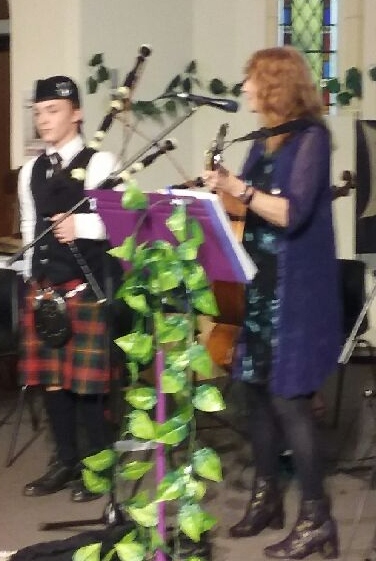 A massive THANK YOU to all who helped make the day such a success:  to sound engineer and drummer Shawn, to musicians Catherine, Jenny, Bryce, Katy, Maree, Bill, Ray, Trevor, Rob, Don, and of course Daniel, to Stephen, to my daughter Gronya and her friend Suzanne, to Gwen and other church members who helped with food etc. Last but not least, thank you to all audience members, as without them it wouldn’t have been such a success. THANK YOU! 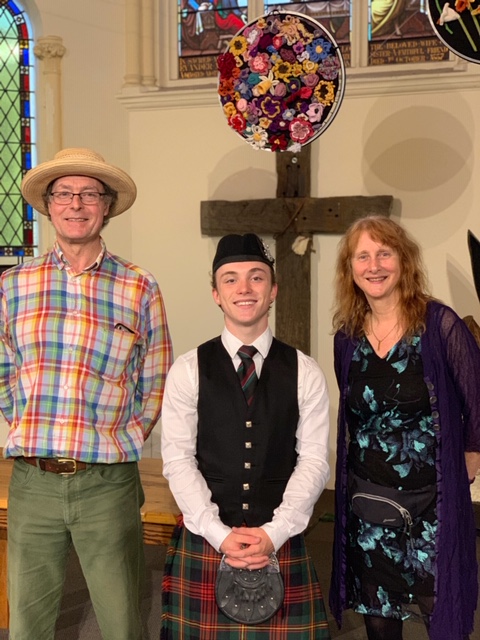