The Big Day finally arrived for my first ‘Baloney’ CD launch. This took the form of a house concert in Northcote, as my good friend Stephen Whiteside kindly offered his place as the most suitable venue. Luckily I suggested it start at 2.30 pm, which gave me and most of the musicians time to partake in the massive memorial service for Harry Gardner (highly esteemed life member and ex President of the Victorian Folk Music Club) in Ringwood late morning/early afternoon and still just make it to my launch. And despite the inclement weather – a cool change with rain, I think a great time was had by all.

The first musician, Ray the didgeridoo player, to my surprise actually missed the front door and tried to squeeze in through the side gate – all I saw was this large hand suddenly poking through the gate as I tuned up my guitar.  Then, to my continued surprise, one of my students from school turned up with her dad about 10 minutes early. And after that, people kept rolling up – for the next couple of hours as some got lost, blaming their GPS… The musicians all made it, thank goodness, even from Harry’s wake, in reasonable time, but James the bass player rocked up just as we were about to start without him. He had had another gig in Craigieburn all morning and then Saturday traffic to contend with en route to Northcote.

So we got started by about 2.40 and then somehow managed to perform all 20 tracks on the CD by a little after 5 pm as planned, with an afternoon break halfway through.  With the audience seated snugly on their Bunnings green chairs in Stephen’s living room and we musicians out on the covered decking, I was grateful for Bryce and Katy lending me their clip-on microphone to take the pressure off my voice. I had never used one before and found I much preferred it to a normal mike as it didn’t prevent me moving around or bending over at times. 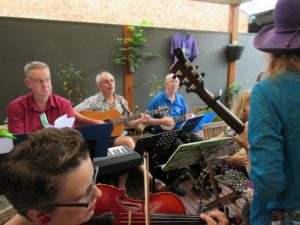 I believe at least some audience participation makes for a more enjoyable concert experience, so we began with ‘A Dog’s Life’ requiring regular woofing in place of percussion. And this audience obliged fairly readily, gaining courage and volume by the end of the song, with no problems like at our recent practice at Maree’s and Bill’s, where their normally quiet dog Ying was utterly outraged at humans woofing and howled relentlessly until we stopped.  The second song, ‘A Little of Your Time’, was fairly emotional for both me and my daughter Gronya, as the song was written for my ex partner Peter before he died in 1998 when Gronya was only 3 years old so has no memory of him. All Gronya wanted from me for her 21st birthday was a recording of this song, and it was amazing to see/hear her singing the high harmony yesterday that I wrote so long ago. And thanks to Katy & Bryce, we now have her immortalised in their recording of the whole event (unbeknownst to me at the time).

The humorous songs all seemed to go down well, especially ‘The Breastfeeding Blues’, written some years ago as I ended my 12 years of virtually continuous breastfeeding. More audience participation just before afternoon tea in ‘How I Love My Hottie’, with me in a long nightie and Maree and Katy in daggy dressing gowns, was terrific fun – ending in the whole room singing the three part round with gusto!  Having never been able to have a rehearsal with ALL musos present at once can have strange consequences, such as James the bass player and Bill the guitarist both thinking they must do the evil landlord spoken part in ‘The Creeper’s Curse’. Suddenly there were TWO evil landlords, until one sort of fizzled out….. and Bryce’s simulating my strangulation with a creeper was perhaps slightly overdone, but led to lots of laughter. The inclusion of more unusual instruments helped too, with Ray’s brilliant didgeridoo in two songs and Michael’s superb Uillean (Irish) pipes in one song and one instrumental practically bringing the roof down. 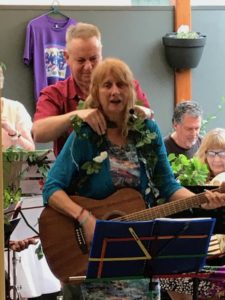 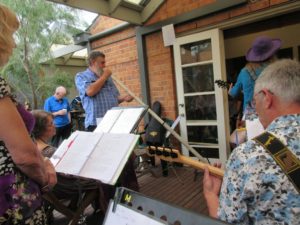 The afternoon tea was truly amazing, with not only the cheesecake and slices that I had already made, but also the mountains of food & drink (wraps, dips, punch, etc.) provided by my two daughters, Bridget and Gronya, which just kept on coming! And many thanks to Gronya’s friends, Suzanne and Mary-Anne, for their kind assistance – and kitchen dancing & swaying to the music too. It was in fact difficult to resume the concert, with some leaving then (after mostly buying a CD). Some of the musicians took the opportunity to simply have a jam session in the break, which was a lovely touch. Overall, everyone seemed to enjoy themselves enormously, from the two 10-year-old children to the couple of nonagenarians, and I was very gratified to receive positive feedback both on the day and since from musicians and audience members alike.  Just hoping that my second launch at the folk club on Tuesday evening, 13th March (7.45 – 10.15 pm) at Knaith Road Reserve Community Hall will be as much fun.  It’ll certainly be shorter, with a one hour time constraint, which made yesterday’s launch more relaxing as we were able to perform the whole album over a pretty relaxed two and a half hour period. 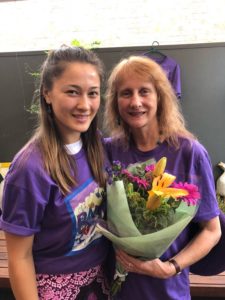 Many thanks to all the musicians involved:  Catherine on violin, James on bass, Bill on guitar, ukulele & vocals, Bryce on keyboard, Maree on piano accordion & vocals, Katy on kazoo, shaker & vocals, Trevor on mandolin, Ray on didgeridoo, Michael on Uillean pipes, Bruce on snare drum, Jill on glockenspiel, and Gronya on vocals. And also to Stephen, who provided the BEST venue for such an event! 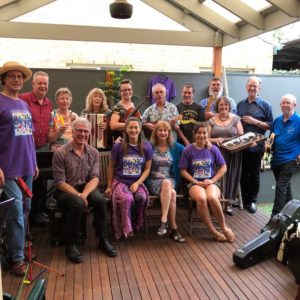