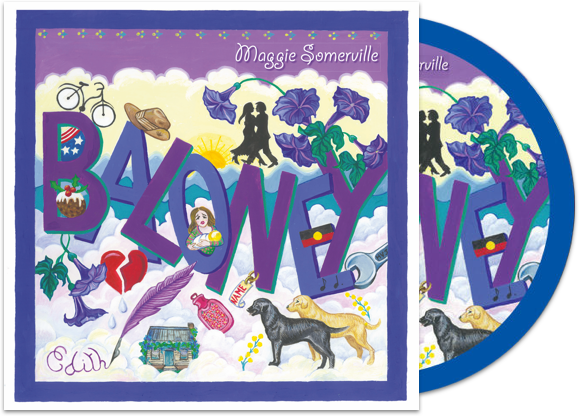 My second solo CD - 20 original tracks, comprising 15 songs and five tunes, with a wide variety of instrumentation provided by the late Hugh McDonald, James Clark, Sam Lemann, Lachlan Davidson and many others.

This CD began as a way to save a few leftover songs and tunes from total obscurity that never made it onto my first solo CD, ‘Roller-Coaster’. However, it gradually became much more as I found myself gathering energy and inspiration, particularly from my new membership of the Victorian Folk Music Club since 2011. For now I didn’t feel so alone and adrift in the folk scene as, unlike many other folk clubs, the VFMC is inclusive rather than exclusive, so that you can choose your level of involvement and there is no great pressure to perform at a high level. However, there are some great musicians and bands within the club and I have found the whole experience uplifting as well as stimulating. My long years of minimal musical activity faded into oblivion as I found myself suddenly writing lots of new songs and tunes, which I could try out at the folk club if/when I desired and then usually receive honest and helpful feedback.

So ‘Baloney’ started to really take shape in 2016 as I began to record with ex-Redgum member and musical wizard, Hugh McDonald. Not only was Hugh a fast and competent sound engineer but he was also able to hear a song or tune just once then grab whatever instrument/s seemed most appropriate – be it violin or bass or guitar or mandolin or banjo or snare drum, to enrich the overall result. Having already just recorded a joint album (‘The Two Bees’) with Stephen Whiteside in 2015 at Hugh’s studio, I then burned a trail out to Hugh’s studio in Kew on a weekly basis as, sadly, we were racing against time. For despite Hugh’s words: “I must finish Maggie’s CD”, this was not to be and on 18th November, 2016 Hugh finally succumbed to the cancer that he’d held at bay for so long – a tragic loss for so many! No more recording with him at night, no more laughs, no more cuppas, no more Hugh! However, his death within days inspired track 4 on my half-finished album: ‘Hugh McDonald’s Lament’ and I like to think that he’d be happy with it if he heard it, especially as he knew personally everyone playing this instrumental:- me on tin whistle, Sam Lemann on guitar, James Clark on bass, Lachlan Davidson on violin, and Steve Grant on piano.

Hugh’s spirit has lived on for me after his death as his wife Rebecca kindly gave permission for James Clark to continue recording with me in Hugh’s studio. We did this for some months until the property was being prepared for sale, after which time we moved the recording to James’ farm studio up at Riddells Creek. Now I found myself gazing out of a studio window at paddocks, horses, little blue wrens, and so on. And thanks to James and his incredible patience and singlemindedness, we managed to pick up the pieces that Hugh had left and to actually finish the CD by the end of 2017 as originally hoped.

As with my first album, ‘Roller-Coaster’, I wanted this album to also be a mix – to comprise mostly songs but with a few tunes included as well at carefully placed intervals. As I have written quite a large number of tunes, I had to choose with care, and hence the four tunes accompanying Hugh’s lament emerged onto the CD: ‘Dunlewey Dream’ for the tiny village in the Irish Gaeltacht where I worked as a nanny in the mid 70s and still regularly visit, ‘Bridget’s Bicycle’ and ‘Foster Market’ after my middle child’s bike and the wonderful market near our holiday house in South Gippsland, and finally, ‘Whiskers in the Whistle’, inspired by Steve Bullock’s beard getting tangled in his whistle one evening, and ‘Harry’s Baking Bread’ for VFMC nonagenarian Harry Gardner’s famous yummy home-made bread.

The songs on this latest album include some written decades ago that for various reasons never made it onto ‘Roller-Coaster’, such as ‘The Creeper’s Curse’ written in 1979 in a blind rage at my landlord continually ripping down my vines, ‘A Little of Your Time’ written in the 1990s for my ex-partner before he tragically died in 1998, and ‘The Breastfeeding Blues’ composed also in the 90s after about 12 years of endless breastfeeding. Most of the other songs evolved more recently, triggered off by random factors, such as my encountering the daughter of a coast watcher in World War II, which led to my ‘Heroes of Guadalcanal’ song. ‘Don’t Give Up Your Name’ was written once it gradually dawned on me in my 30s that women actually need NOT change their name on marriage if they choose not to. The song is based very much on the true facts in my own life – that a major factor in my cancellation of my imminent marriage in 1972 was the growing belief that I would never feel right as Mrs Baker, who I imagined to be a stay-at-home housewife and mother, chatting over the fence to her neighbour and forever cooking, cleaning and knitting. That woman was not me and never would be, but back in the early ‘70s, despite Women’s Liberation, no woman ever considered keeping her own surname on marrying.

Another light-hearted song on the CD is ‘How I Love My Hottie’ – again triggered by real passions and events. ‘Streets of Fear’ burst out of me after seeing Jill Meagher’s poster outside my local pet shop and realising that it could have been me or my daughters! And ‘Koori Spirit’ was inspired by my friend Sue’s discovery at 18 that she was of Aboriginal descent. Similarly, ‘One Forgotten Soldier’ relates my mother’s experience as a sergeant at the Puckapunyal army base during World War II, where she came very close to death…….. ‘Garage Girl’ came about as I riffled through old newspapers for my Year 11 students and came upon an article about an amazing woman who founded an all women auto mechanics’ business in the 1920s. ‘Wattle Day’ happened when I first joined the folk club and was ashamed as a true blue Aussie to learn that I had never heard of Wattle Day. Many readers will surely relate to ‘The Weatherboard House’ with its message about progress and urban development, as they will to ‘Aussie Christmas Day’ which gently attacks our absurd English/Aussie tradition of displaying snowy Xmas cards and of cooking a turkey and baked vegetables often in extreme heat.

Deciding on the order of items for ‘Baloney’ was challenging, with so many factors needing to be taken into consideration. The key was a big one – trying not to juxtapose songs or tunes in the same key, as well as the tempo and instruments. I made a last minute change on realising that the only two songs featuring piano accordion were beside each other on the CD. I also tried not to have the songs with male vocals too near each other. The content naturally had to be considered so that two or three sad or silly songs were not lumped together. And in line with the title meaning rubbish, I felt I must start the CD with a light-hearted song: ‘A Dog’s Life’. Similarly, it felt right to end the album with my song about my Irish cousin Edith whose middle name ‘Oenone’ rhymes with baloney and which ends with a rousing instrumental featuring the magical Uillean pipes. 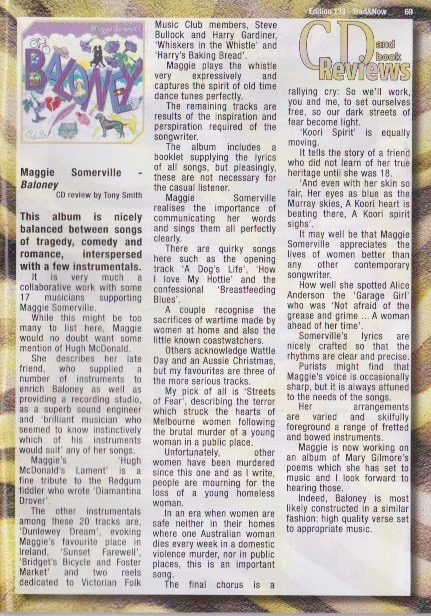